US President Barack Obama has expressed his anger after plans for more background checks on people buying guns were voted down.

He is campaigning for tighter gun laws after 26 people were killed in a school shooting in Connecticut in December. 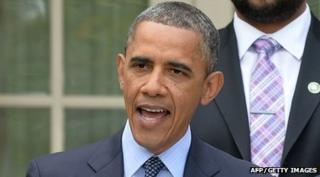 "This was a pretty shameful day for Washington," Mr Obama said at the White House. "But this effort is not over."

The plans were six votes short in the Senate - which is one of the two bodies where laws are made in America.

There were 54 votes in favour and 46 votes against, but the plans needed 60 votes to go through.

Many Americans believe passionately that they have the right to keep and use guns.

The US has one of the highest rates of public gun ownership in the world.

But Mr Obama claimed that nine out of 10 Americans supported the proposals.