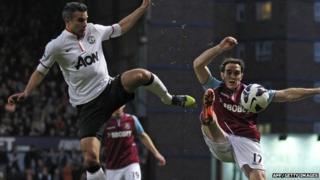 Manchester United's lead in the Premier League has been cut to 13 points after a 2-2 draw with West Ham at Upton Park.

But there was controversy after Robin van Persie's 77th minute equaliser later appeared to be offside.

The other goals came from West Ham's Ricardo Vaz Te and United's Shinji Kagawa before half-time; Mohamed Diame netted for the Hammers one after the break.

Chelsea move into third place in the table thanks to a 3-0 victory over Fulham.