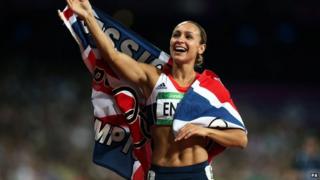 Some of the biggest stars of London 2012 are set to compete in the Anniversary Games, held in July at the Olympic Park.

14 of the 16 Paralympic medallists will compete in the IAAF Diamond League and IPC International Challenge events too.

Jessica Ennis said she was "training hard and getting excited".

"I have amazing memories of competing in the Olympic Stadium last year and it will be good to step out on that track again in front of a British crowd," she added.

The gold medal winning heptathlete is set to take on the 100m hurdles and long jump. Mo Farah will run in the 3,000m, while Greg Rutherford will be appearing in the long jump.

Meanwhile, the head of UK Athletics, Ed Warner, has said Oscar Pistorius will almost certainly be told he can't compete in the London Anniversary Games.

The Paralympic sprinter is accused of the murder of his girlfriend Reeva Steenkamp in South Africa and is set to stand trial.

Warner said he didn't want the final day of the event turning into a "media circus".