Teenager bids to be youngest person to row Atlantic 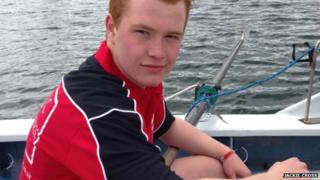 A teenager from Oxfordshire in England is trying to become the youngest person ever to row across the Atlantic Ocean.

16-year-old Eoin Hartwright will be part of a four-person team rowing 3,000 miles from the Canary Islands to Antigua in the Caribbean.

If he succeeds, he'll break the record held by Rachel Flanders - who was 17 when she started her Atlantic row in 2008.

At the moment, Eoin's studying for his GCSE exams.

But on 2 December - a month before his 17th birthday - he'll set out on a challenge that's been described as "the world's toughest rowing race".

He told the BBC he reckons the challenge will be "gruelling and horrible", with "sweat, pain and tears".

During the race Eoin will be living off water and rehydrated food, rowing for two hours at a time before having two hours off.

His team hopes to complete the challenge in 40 days.

Guinness World Records say that it's the age at which you set off on the journey that counts, not the age you complete it - so if all goes to plan Eoin will be the youngest ever.