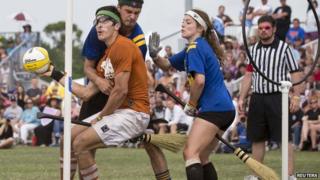 It's a sporting sensation straight out of the Harry Potter books.

Real-life Quidditch is becoming more and more popular, according to the International Quidditch Association.

The game is based on J.K Rowling's creation, with players running around on broomsticks, trying to throw "quaffles" through ringed hoops.

Players can even chase and capture the "snitch'' to end matches.

But the game isn't just played by Harry Potter fans, with some of those taking part in the World Cup saying they enjoy the athletic side too:

"We have people on our team that have never read the books or seen the movies,'' said University of Ottawa team founder Clare Hutchinson. "Quidditch is not necessarily all about Harry Potter anymore."