Hundreds of 'sticky' birds wash up in Devon and Cornwall 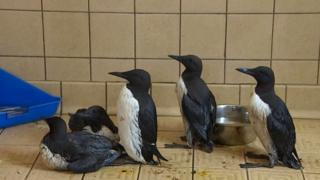 More dead birds covered in a sticky substance have washed up on beaches in Devon and Cornwall in the south west of England.

Hundreds of birds have been found since they started to wash up on Wednesday.

Over 100 birds, including guillemots and gannets, were found dead on one stretch of beach on Sunday morning.

Most of the birds that have been found are guillemots, but razorbills, puffins, gannets and cormorants have also been found dead.

The RSPCA is treating rescued birds, at its centres in Cornwall and Somerset.

The sticky substance has not been identified, but it's thought the birds have been covered in the same substance that affected hundreds earlier in the year.

In February, more than 300 birds were taken in by the RSPCA after being found covered in a similar glue-like substance.

Coastguard workers say they're trying to work out how big the problem is, and where it's come from.

The RSPCA says that people should contact them, rather than trying themselves to help any injured or distressed birds.

Dog walkers have been told to keep their pets away from dead or injured birds.