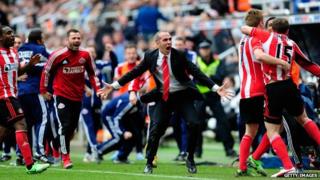 Sunderland gave their hopes of survival in the Premier League a massive boost on Sunday, thrashing arch-rivals Newcastle 3-0.

"As a single game, it is the most important win of my career, but it's nothing if we don't stay up," he said.

There was violence after the match though, as Newcastle fans marched in crowds through the city, throwing bottles and bins. Mounted police tried to hold the crowds back.

Newcastle United FC said in a statement that it was "embarrassed and appalled by the behaviour of a minority of so-called fans".

The club went on to say that they would work with the police to find out who caused the disurbances and would "impose immediate lifetime bans on all those found guilty".