Do you feel under pressure to cheat at sport? 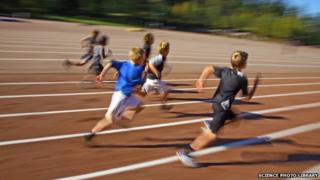 Two-thirds of kids in the UK feel under pressure to cheat at sports.

One in four of the children who answered the survey's questions thought their mates would cheat frequently if they could get away with it.

Experts claim it's because kids are under pressure to win all the time.

Some of the examples of cheating included tripping up or fouling people, hitting other players with hockey sticks, and not running the right amount of laps in cross-country races.

More than a third said they didn't feel bad at all about winning by cheating.

But about half said they would have felt angry or frustrated if they lost a game because of cheating by another team.

The survey was carried out by the Marylebone Cricket Club and the Cricket Foundation charity.

We asked you what you think about this - do you ever feel under pressure to cheat at sport? If so, how do you do it? Is winning at sport important to you? Or is it the taking part that counts? Here's some of the comments you sent.

"I think that I am not under pressure to cheat at sport as what's the point in cheating as you're not really achieving anything? Instead, you should work hard in a certain sport and train as hard as you can, so when you win you feel that you've achieved something."

"We think you shouldn't cheat because it's not fair on the other people. If we won by cheating, we would not feel good about it."

"I don't think there is anything wrong with being under pressure to win. Everyone wants to win and it encourages us to become better athletes and hopefully go on to the Olympics!"

"No, because the people around me are always very supportive of me when I play sport."

"I think that no matter how hard the pressure is you still shouldn't cheat, but I don't ever think about cheating because for me it's all about taking part."

"I think cheating is wrong. If you are in a race, it's not the winning that counts, it's the taking part. If you do win, well done you."

"When I compete, I don't feel under pressure to cheat and I don't think anyone should, because we're just kids and it's only a game."

"I have always been really bad at sports since I was little and I often come last in races. Despite this, I have never felt motivated to cheat. If I did cheat, I could never live with the guilt. I think it is only about taking part and having fun in sports not winning."

"Sports is just for having fun not for cheating."

"I'd feel kind of bad if I cheated but not so bad that the guilt would eat me up. If there was a way to cheat and not get caught, I'd probably do it."

"Sometimes I do feel under pressure to cheat in sports; some people show off and really rub it in your face if you didn't come in the top 3."

"I don't feel under pressure to cheat when playing sports, no matter how hard it is. If someone else cheats and wins, then that makes me unhappy."

"Yes, because I am disabled it is hard for me sometimes. I feel like I want to cheat but I know it is not right to cheat, so I don't."

"I think cheating is wrong and it should stop!"