Fire breaks out at zoo in West Lothian in Scotland 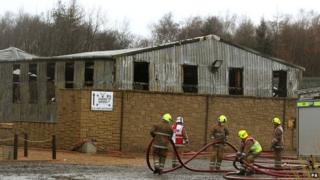 A number of animals have died after a fire broke out at a zoo in West Lothian in Scotland.

The blaze started in the tropical house of the Five Sisters Zoo in the early hours of Sunday morning.

None of the staff were hurt and some animals were rescued as fire fighters stopped the flames from spreading.

The Scottish Fire and Rescue Service think a heating system in the reptile house could have started the fire.

According to the zoo, several reptiles, 11 meerkats, an otter and an ant colony died in the blaze.

Lesley Coupar, from the zoo said: "The owners, staff and volunteers are all completely distraught because our main purpose is to look after and care for these animals."