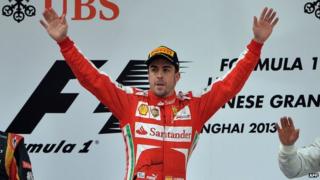 Fernando Alonso has won the Chinese Grand Prix in Shanghai.

The Spanish driver was in control as Kimi Raikkonen and Lewis Hamilton fought off a late challenge from Sebastian Vettel for second and third places.