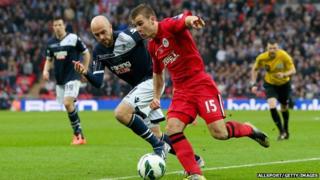 Wigan Athletic beat Millwall 2-0 to reach the final of the FA Cup for the first time in their 81-year history.

Millwall had more chances in the second half but Callum McManaman's goal in the last 13 minutes wrapped up the victory.

Roberto Martinez's side will face Manchester City in the final after Roberto Mancini's side beat Chelsea on Sunday.

But the game was tainted by Milwall fans fighting with each other in the crowd.

Police made 14 arrests as some younger fans were reduced to tears by the violence.

Milwall FC called the fighting "mindless" while the FA condemned the behaviour.