Do you prefer spending time with your pets or family? 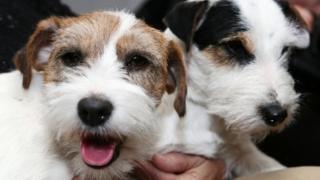 A survey of pet-owners in the UK by My Social Petwork has suggested half would rather hug their furry friend than a member of their family when they're feeling sad.

Around 67 million people in the UK have pets and 15 per cent admit to chatting to their pet and telling it secrets.

One in five pet owners even confessed to cancelling plans to go out with mates so they can stay home with their pet.

Sorry this chat page is now closed, but check out some of your comments below.

"Personally I wouldn't tell my dog Bruno secrets or something that's bothering me because he can't give me advice. I think if you're sad you need to tell someone but a big cuddle with your furry friend is great and you know your secrets are safe!"

"I would rather play with my mates because my cat, who is called Jem is very old so she doesn't play. I still love her to pieces!!"

"I love pets and cuddling a dog or cat is a lovely feeling but having another human to hug is slightly better because they can talk to you and you know they understand."

"My dog means the world to me, but a friend is better to chat to!"

"Both because my dog is very comforting to be with but my family are very supportive when things go wrong."

"I have four chickens but I don't really like them so I would rather be with friends."

"I spend most of my time with my dog, Oscar, because my parents work longs shifts at their hotel and restaurant; my brother usually helps them so I'm on my own with Oscar nearly all day."

"My brother has a dog called Bruno and when Bruno comes to visit I always talk to him, tell him secrets, give him hugs and I just feel better telling a dog my worries or secrets then a human, because dogs can't talk back to you and dogs can't go and tell people your secrets. However, I still like receiving hugs from humans and talking to people too."

"I would go for my friends as mine can ALL keep a secret and would probably be able to give me more sympathy than my two hamsters (Bob and Ham) as they are mostly in bed all day, and can't talk back."

''My dog means the world to me, but sometimes it's better to talk to someone that can give you advice and help you.''

"I don't have any pets but I have at least 12 cuddly toys. My favourite one is my toy monkey; when I get upset I talk to him."

"Both. If it's something people don't see from my point of view, I tell my dog, also he can't snitch on secrets. But for some problems I need help from a person to sort it out."

"I love spending time with my 13 year old cat called Bailey and my 2 poodles called Tilly and Tallulah!"

"I think I prefer to be with my family but I tell my rabbit everything that I can't tell anyone else."

"Family! They can talk to you whereas pets just stare at you."

"I prefer to play with my friend because he lets me play on his PlayStation and my pet can't play this with me."

"I would much rather cuddle my golden retriever than my brother."

"I love my dogs Jack and Ned and they make me feel 10 times better when I'm sad."

"I love my hamster kit-kat so much because he is always there."

"I have four goldfish - Miranda, Gary, Orlando and Bloom. I also have a pet rabbit called Fiver. I often talk to my pets because I know they can't repeat it to any one else. It is really comforting to have a little friend that you can tell everything to!"

"My dog is very cute and cuddly and when I feel sad I go up to him and give him a little chat about school!"

"I think you should spend time with both, just on different days."

"I love my dogs so I tell my dogs my secrets that I never tell my friends."

"I would definitely tell a pet because my family dog Bella instantly cheers me up and she is good company."

"When I'm sad a cuddle my cat Tufty. When he is sad I give him some ICE CREAM."

"I would rather spend time with my Hamster when I'm sad as when I talk to him I think he understand my secrets and feelings, but the great thing is they can't talk to anyone else about it."

"I really like my pet but I think I prefer my human friends."

"I tell my horse Monty everything that makes me sad because I know that he can never tell anyone."

"I love my fish and I tell my fish more than my family. I would rather stay at home with my fish than go to school."

"I love spending time with my cat T.C. She is always there for me and when I am sad. She sleeps on my bed at night and she is the best friend I could ever have."

"I think that if you have a pet you should spend time with your real friends because you live with your pet so you will see your pet anyway."

"I have two cats, Tiger and Jasmine, and they are very friendly. I would much rather be with them than go anywhere and I often tell them secrets."

"I love my cat to bits, I have had him since I was born and I tell him all sorts of secrets. I always cuddle him when I'm down, I'd much rather talk to my cat and cuddle him than a real person because they are so much better because they can't judge you and they make brilliant listeners."

"I'd say my family because they're who you can talk to! But my rabbit is part of my family!"

"I love playing with my friends but my pets are so sweet especially my two cats Molly and Emrys, so I chose pets."

"I'd go out with my friends but always leave time to spend with my 8 pets. If I were sad, I'd probably get out my rabbit, Cleo. I called her that because she has eye liner and brown eye shadow like Queen Cleopatra of the Egyptians."

"I would rather spend time with my pets because when they're dead they're gone forever so I try to spend as much time as possible with my dog Jim."

"I would like to spend more time with my pets but they are old and like to sleep a lot."

"I would rather spend time with my puppy Wiggles than my friends because I love her so much."

"I love my dog and I spend a lot of time with him. I can't say much to my parent but with my dog I can tell him anything."

"My dog is called Bo and I would rather hug him because he dose everything with me and when I'm ill he comes to sit on my bed. Also when I need someone to speak to he's the one to go to."

"I always talk to my small goldfish Bob about my secrets and wishes."

"I have two cats who are two years old named Oscar and Pepper. I always talk to them and tell them things I don't tell my friends and I love them very much and I'd hate to be without them."

"I love all my animals and would prefer a hug from my goats or any of my animals than family because they are more cuddly."

"I like to play with my Uncle's dog I see everyday and I play with him, but I know when to stop."

"I would rather play with my dog than my friends."

"I would prefer to stay inside and have some quality time with my pets rather than go out with my mates because I can see my mates all the time but my pets won't be around forever."

"I have two cats, Poppy and Lily and they are gorgeous. Sometimes Poppy is on my bed when I go to sleep which I love and Lily used to sit on my lap, but she hasn't been lately. I would prefer my pets if my friends/ family were annoying me but I'm not sure about otherwise."

"I hug my cat Sunday in bed and she licks my neck, which has created some love between us, so I tell her all my secrets. I also love my other cat Alvin but he is naughty."

"I want to stay with my pets because my dog has had puppies and they're so much fun!"