Cold weather is putting one of UK's rarest birds at risk 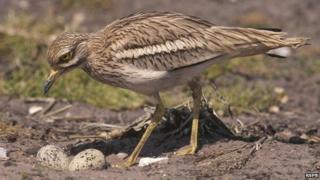 One of the UK's rarest birds is being put at greater risk of extinction by the cold spring, according to bird experts.

The Royal Society for the Protection of Birds said the bodies of eight stone curlews had been found in fields in Norfolk, Suffolk and Wiltshire over the past few days.

It's thought there are around 400 pairs of stone curlews in the UK.