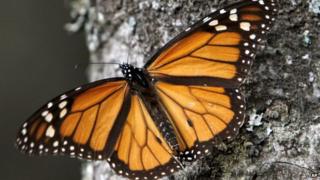 Monarch butterflies that migrate every year from the United States and Canada to Mexico use the Sun to orient themselves, but have no inner 'map sense', says a new study.

Every autumn millions of the winged insects travel a whopping 4,000 kilometres to spend the winter in warmer climates.

German scientist Henrik Mouritsen suggests that they make this massive journey without ever knowing where they are in relation to their destination.

He studied their migration by moving the butterflies 2,500 kilometres away, and found they did not correct the direction in which they were flying. So it became clear the butterflies didn't know their location had changed.

"People seemed to assume that they [the butterflies] had some kind of a map that allowed them to narrow in on a site... it is clear that they don't", he says.

But other scientists say that that more investigation into this theory is still needed, and that the study moved the butterflies too far off-route to be useful.