Phil Neville to leave Everton at end of season 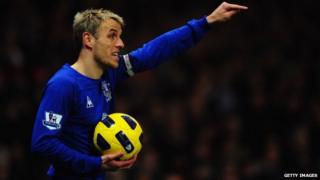 Phil Neville has announced that he will leave Everton at the end of the season.

The former England international joined the Toffees from Manchester United back in August 2005.

Neville has made 25 outings for Everton this season and 303 appearances in total for the Merseyside club.

Everton are currently challenging for a top-four spot and entry into next season's Champions League.

During the summer, Neville will work as part of Stuart Pearce's England Under-21s backroom staff at the European Championships in Israel.