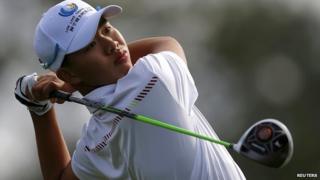 Golfing fans are getting ready for the year's first major - the Masters at Augusta.

Tiger Woods is back at world number one and is the hot favourite to win.

But Tiger will have to share the limelight with a 14-year-old Chinese prodigy - Tianlang Guan.

Tiger Woods and Tianlang Guan met during a practice round

Guan was born a year after Woods won his first Masters in 1997 and will become the youngest ever competitor.

The previous record was set in 2010 by 16-year-old Matteo Manassero from Italy.

Former Open champion Darren Clarke has had to pull out with a leg injury.