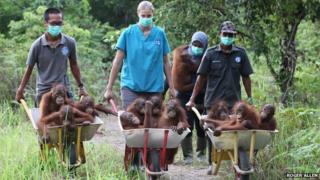 Thirty baby ourangutans have been saved from appalling conditions and moved to a new home in Borneo.

The charity International Animal Rescue found the apes living in shacks after the forest where they lived was destroyed and their parents killed by hunters.

Now the creatures have been moved to a big new rescue centre in West Kalimantan. But the babies didn't travel by ordinary means - the easiest way to move them was by wheelbarrow!

Ourangutans are one of the world's most endangered species - it's thought that there are fewer than 50,000 left in the world today.

It's not just loss of their habitat that threatens their existence: hunting and the illegal trade of them as exotic pets are seen as major factors as well.