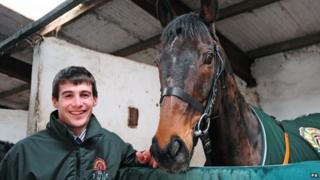 The Grand National winning jockey, Ryan Mania, is recovering in hospital after suffering neck and back injuries in a fall in another race.

The accident came less than 24 hours after the 23-year-old rode Auroras Encore to victory in the Grand National at Aintree.

Mania was treated for more than half an hour at the track before being airlifted to hospital after the fall during a race at Hexham, Northumberland.

Last night the jockey tweeted - "Thanks so much for all the messages. I'm grand."