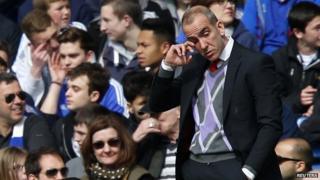 Sunderland's new manager, Paolo Di Canio got off to a losing start after his side were beaten 2-1 at Chelsea.

The Black Cats took the lead after Chelsea scored an own goal.

The 2-1 defeat means Sunderland are now only just above the bottom three on goal difference.

Elsewhere, Wigan scored in injury time to earn a 1-1 draw at QPR. Newcastle scored a vital last minute goal to beat Fulham and Tottenham were held to a 2-2 draw against Everton.

When Di Canio was appointed Sunderland manager after Martin O'Neill was sacked last month, some people were critical because they said his political views were controversial.

Back in 2005, when he was still a player for Italian side Lazio, Di Canio was banned for one match for making a political salute that some people found offensive.