Justin Bieber says he has four friends. Do you need more? 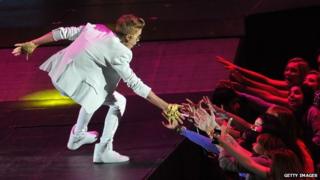 "I only have like four people that I keep in contact with. I don't need a bunch of friends to make me happy," he said.

It's led to some discussion in newspapers and on TV and radio shows about how many friends people actually need.

Of course, over the last few years, social networking sites have allowed people to have hundreds of mates.

Research carried out by an Oxford professor says four to six close friends is about right.

But research from another university in America says having so few friends could be bad for you.

"I've got lots of friends because I go to a small school of only 24 children. That means I know everyone there. But I do think that everyone should have one special friend that will look out for you."

"It doesn't matter how many friends you have, as long as you have someone you are fine. Your friends are part of your life and it would much harder without them!"

"I think you should just have a few close friends like Justin Bieber as they are the ones that you can trust."

"I have loads of friends. Over 20. And they come from different places. I think it is good to have lots of friends because each friend is different so in a time of need they have a certain quality to help you with!"

"I think you should have a mixture of friends. Like maybe a few from school, a few from your neighbourhood, a few that you occasionally meet. That way you'll never be lonely wherever you are."

"I think you don't need many friends as long as the ones you have are kind and loyal to you."

"I have one BFF and four other friends to play with. I think that's about how many good friends you need!"

"I like to have plenty of friends, so you get a nice variety of personalities. However, it is best to have that couple of special friends who you trust to confide in."

"At the moment, I've only got about three close friends who I can really tell my secrets too. However I'd definitely be lying if I said I wasn't happy. I just remember that it's the quality of your friends, not the quantity."

"I like having lots of friends to hang out with, but also having a few really close friends to talk to in times of need."

"For me it doesn't mater how many friends you have as long as they're nice, caring, and most of all fun!"

"I have seven close friends and other friends who I talk to but don't spend lots of time with. Someone I know has 30 friends!"

"I have four really good friends, and one of them always says 'If you ever need a shoulder to cry on, you can come and cry on mine!'"

"My Dad says if you can count your friends on your hand you are very lucky."

"I need more friends because I would get lonely with only four friends."

"I have four friends too - they rock! I think Justin Bieber is right. you only need enough friends to make you happy. Four is enough for me and JB!"

"I have two good friends in school that I go around with, plus two others who I'm pretty good friends with, then I've stayed in touch with three of my other good friends from my old school. It's quite hard though, because I can't really mix my new friends with my old friends - I'm not sure they'd get on."

"I have two very close friends that I go around with all day and we do stuff together out of school. Then I have quite a large group of other friends that we sometimes hang around with, but we aren't as good friends, we just chat."

"I like having a big bunch of friends. It makes me feel loved!"

"I have three friends - I think you need about three... one best friend and two people you hang out with. My friends have to be honest and kind."

"I can understand Justin Bieber not needing as many friends as other people because he is always travelling so it would be hard to commit to having more friends. Being famous would also make it hard to know when you can trust people, whether they want to be your friend for you or for the popularity."

"It's not about how many friends you have, it's about the fun you have with them... and that they always catch you when you fall!"