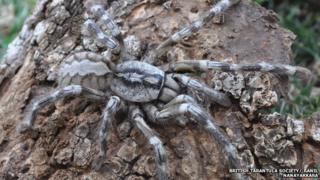 A new species of venomous tarantula has been discovered - and as spiders go it's pretty big!

The tarantula, named Poecilotheria rajaei, has legs that span 20cm.

It was tracked down in northern Sri Lanka, and it's thought to be one of several new species of tarantula discovered there.

The tarantula family of spider includes one of the world's largest, the Goliath bird-eater.

Peter Kirk, Chairman of the British Tarantula Society, told Newsround there are worries about the spiders' habitat.

You may have seen Peter on CBBC's Pet School where he was one of the Extreme Animal Experts.

"The tarantulas of Sri Lanka have been studied in some detail in the past by myself and other arachnologists (spider experts!)" Peter said.

"But we have never been able to visit the north or east of the island because of the civil war that was going on there."

"Now Ranil Nanayakkara - a researcher from Sri Lanka - has done just that. Unfortunately, Ranil has noted that much of this tarantula's natural habitat has been destroyed."

It means the spiders have had to move closer to human homes and villages, he added.