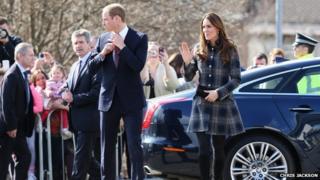 The Duke and Duchess of Cambridge have visited the site of the 2014 Commonwealth Games in Glasgow as part of a two-day visit to Scotland.

The couple visited the Emirates Arena, which has been specially built for next year's Games and will host badminton tournaments among other events.

They also visited the Sir Chris Hoy Velodrome and watched bike riders in a practice session. Sir Chris Hoy is from Scotland and won two Gold medals at the London 2012 Olympic Games.

The Royal couple, who are known as the Earl and Countess of Strathearn in Scotland, are also scheduled to visit a homeless shelter and Skype two teenagers on work exchange in the Netherland's - which is in Europe.

They will chat to 16-year-old Dylan Howie and Lyn Buchan who are taking part in an exchange programme run by the Glasgow-based project for rough sleepers.