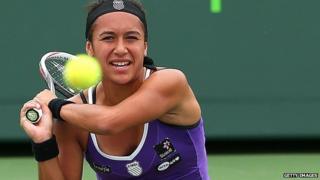 British women's tennis number one Heather Watson has been diagnosed with glandular fever.

The 20-year-old has had a tough time in recent tournaments, being knocked out in early rounds.

In March she announced she would take a break from tennis, before changing her mind a day later.

Now that tests have revealed that Watson has traces of the virus she's said she's "relieved" to know what's wrong.

"This means I have been trying to compete through the symptoms for some time," the star said.

"I have been struggling with both training and playing matches and felt so tired and exhausted for months."

"I hope to recover as soon as possible by resting my body and getting lots of sleep."