The special slime secreted by hagfish could be turned into clothes, scientists say.

The hagfish is a spineless creature that lives at the bottom of the ocean and dates back as far as 500 million years.

It doesn't have jaws but has a special way of defending itself - letting out slime!

So when a shark bites a hagfish, its mouth and gills are quickly covered in slime and the shark has to back off, or face suffocation. 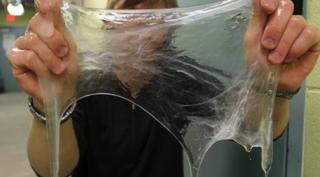 Anna Rothschild
See the slime for yourself!

The slime is strong and stretchy and scientists believe it could be turned into tights, breathable athletic wear or even bullet-proof vests.

But it's going to be a long time before we see it in our wardrobes - scientists say they first need to find ways to raise slime production, either by increasing the number of hagfish or making a similar slime in labs.

Check out the clip above to see a hagfish slime-defence in action...