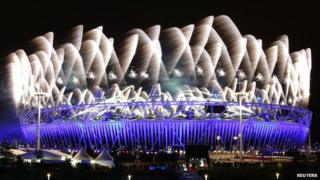 The Olympic opening ceremony has been nominated for this year's television Baftas.

The spectacular four-hour show, which featured the Queen and James Bond, was watched by almost 27 million viewers on BBC One.

It will go head to head with other TV favourites, including Strictly Come Dancing and the Great British Bake Off, for the Radio Times Audience Award.

This special Bafta is voted for by the public.

The winners will be announced at an awards ceremony in London on Sunday 12 May.