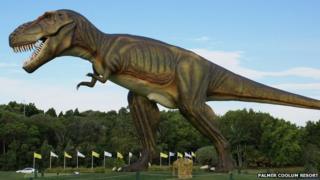 Tyrannosaurus Rex Jeff will be joined by more than 100 new robotic dinosaurs.

An Australian billionaire is building the world's biggest dinosaur park that will become home to 165 robotic dinosaurs!

Palmer Coolum Resort in Australia is already home to Jeff the Tyrannosaurus Rex and Bones the Omeisaurus, but over the next few months will be getting loads of new arrival.

It's being built by Clive Palmer, the same man who is building an exact replica of the Titanic ship.

The new arrivals will include a massive Mamenchisauraus more than 20m long and nearly 7m tall and an Apatosaurus 21m long and 6.5m tall. 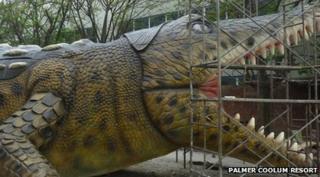 One of the new arrivals - a Deinosuchus.

They'll be displayed in natural woodland at the resort and the dinosaurs will come to life with swaying tails and crunching jaws.