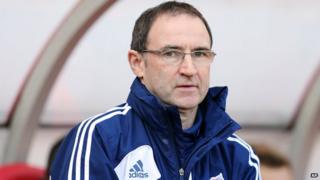 Martin O'Neill has been sacked as the manager of Sunderland, with just seven games left this season.

His team are now just a point off the relegation zone after losing 1-0 to Man United on Saturday.

O'Neill arrived at the Stadium of Light back in December 2011.

The club said a decision on will takeover from O'Neill would "be made in the coming days".