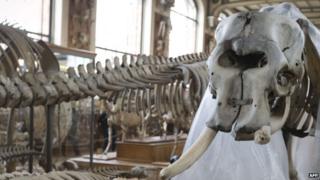 A man in France has been caught by police after trying to steal an elephant tusk from a museum.

The thief broke into the Museum of Natural History in Paris on Saturday night and used a chainsaw to remove the tusk.

The elephant used to belonged to the French King, Louis the fourteenth.

The tusk has been found and museum staff say they're confident it can be reattached.

Security staff were alerted to the crime by the sound of the chainsaw echoing around the building.

The man ran away when the museum's alarms went off but was caught by police in a nearby street.

Police think he was trying to steal the tusk to sell on as ivory.

It's thought between 50 and 100 African elephants are killed every day for their ivory which is used to make ornaments and jewellery.