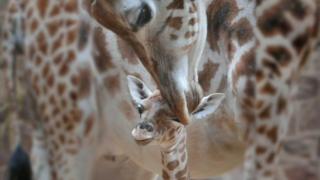 Chester Zoo are celebrating the arrival of a very rare baby giraffe.

Millie is less than a week old, but she's already a whopper at 6 feet tall!

She's a baby Rothschild giraffe, which are an endangered species and there are only thought to be 670 left in the wild.

The animals got their unusual name from a famous zoologist, Lord Walter Rothschild, who founded the National History Museum in Hertfordshire.

The tall creatures are normally live in Kenya, Uganda and Sudan in Africa.

They can be identified by having wider dividing white lines on their skin and by having no spots beneath the knees.

In the past, giraffes were hunted for their tails, which were used as good-luck charms, sewing thread and even fly swats.