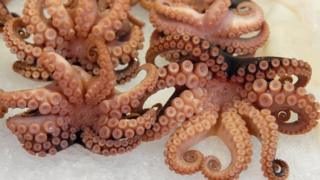 Scientists studying octopuses have found that females stretch their arms the furthest if they want to get hold of some food.

They put the creatures into special tanks and measured octopuses' arm extensions as they reached up a tube towards tasty bait.

They found for the first time that male and female octopuses could stretch to different lengths.

The study also showed that smaller octopuses stretched their arms out much further than larger ones.

In the wild, octopuses use their bendy arms to do things like clean themselves, defend themselves, or so they can capture prey.

Their arms make up the majority of their body weight, and contain most of the nervous system.