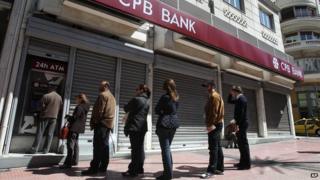 Like other countries in Europe, Cyprus is struggling with money.

Its neighbour Greece has had huge financial problems which has left some banks in Cyprus with big debts.

In the past few weeks some of the banks started struggling to pay back the debts, and the country's government couldn't loan them the cash.

So they then had to go to the European Union to ask for money to keep the country going.

Cyprus' government has agreed a deal with the European Union worth 10 billion euros.

But there are some tough conditions.

People in Cyprus with more than 100,000 euros (£85,000) in the bank will lose some of their savings, so people who have lots of money saved up will be hit hardest.

And Cyprus's second largest bank - Laiki Bank - will be closed down.

At first it was suggested that all customers of Cypriot banks would have some of their savings taken, but that led to protests.

Now the banks have reopened there are strict rules on how much money customers can withdraw at the bank every day.

At the moment people can only take out around £250 a day.

The banks hope that by limiting the amount people can take out they'll stop people taking out all their savings.