A huge plague of locusts have infested the Indian Ocean Island of Madagascar.

The UN food agency says billions of the plant-devouring insects have swarmed the island.

They are worried the bugs could destroy essential rice crops, leaving half of the country's population short of food.

It's the worst plague to hit the island for over 60 years. 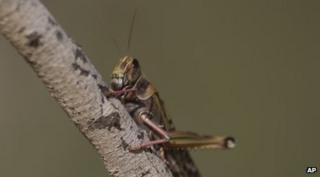 A locust can eat it's own body weight in food everyday.

That might not seem like much but a ton of locusts, which is a tiny part of the average swarm, eats the same amount of food in a single day as 10 elephants, 25 camels or 2,500 people.

Swarms can travel vast distances, covering up to 80 miles a day.

A desert locust swarm can be up to 460 square miles in size and made up of millions of bugs.