Banks in Cyprus reopen after being closed for two weeks 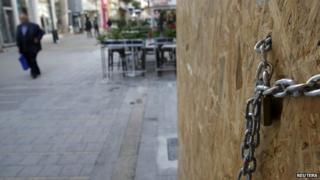 Banks in Cyprus reopen to massive queues after being closed for nearly two weeks.

Politicians there have now agreed a deal with the European Union to help handle the country's money problems.

Thousands of people living on the island have been slowly running out of money.

There will be strict rules about how much each person is allowed to take out of their bank account.

Some Cypriots will only be allowed to take out around £250 a day to stop people from taking all of their money out of the banks.