The voice-controlled gadget, due out next year, has a hidden camera and a small screen suspended in front of the owner to display information.

But campaigners Stop the Cyborgs want limits on when and where the headsets can be worn.

They say there should be a clear way to let people know they're being filmed.

Last month, Google posted a video online showing off some of the new features of Glass.

It can be used to take pictures and record video, and share that content directly via email or social networks.

Voice commands like "OK, Glass, take a picture" were used to control the device - which would then take a pic of whatever you were looking at. 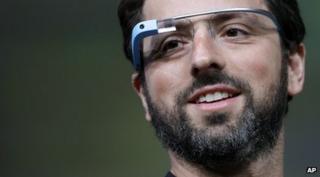 Other features looked to be Skype-like video chats, and information like weather reports and map directions.

All of this information would appear in a small, see-through square in the top-right corner of the glasses' point of view.

Or do you think internet-connected glasses are a great idea and can't wait to get your hands on them?

Send us your comments using the form below and let us know what you think!

Sorry this chat page is now closed, but check out some of your comments below...

"I think that internet-connected glasses are epic! I would definitely try them! Who CARES what the bullies think!? I don't!"

"I think these are a great idea because when you take a picture on your phone, you could be invading people's privacy as well. They should have rules on mobile phones too."

"I don't think it is a great idea because it is not good for your eyes and people might take advantage and bully people."

"I think it's amazing the way technology has developed, but this seems quite dangerous. I wouldn't buy it myself, it's probably very expensive anyway! I wouldn't want to be bullied, so I probably wouldn't take the risk. I want my own privacy, I don't want to be filmed! I'm kind of torn between the two sides of the matter, but I think it's a bad idea!"

"I think these are a great idea! It will be good to try something new, but they're not exactly the prettiest glasses. Some kids could get jealous and start bullying the ones who have these glasses, so that's why I wouldn't buy them."

"I think that it's a good idea because you don't need a tablet or phone to use the internet but it can be used for bullying because it can be harder for police to track the people down who aren't using the glasses properly."

"I think this is a very bad idea because we can play games during class without the teacher knowing and people can take embarrassing pictures of you. Also, if we keep on developing technology like this, before we know it, we will all be fat and lazy, using some kind of device to contact the person right beside you!"

"Even though this is an brilliant invention I don't think that I would buy/use it myself. I also think this will increase bullying. I would also like my own privacy and wouldn't like to be filmed without knowing. I don't think this is a good idea and I think they should steer well away from it."

"I think that Glass is an amazing concept but I thick the tech is going too far, people should be able to do and go anywhere without others recording or taking unwanted photos of them. Yet the eye site, access to directions and use when on mountain bikes as a communication device is amazing!"

"I think it would be cool! I think I'm going to start saving!"