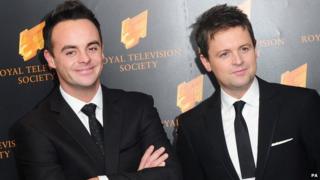 Presenting duo Ant and Dec have entered the iTunes midweek chart at number one with their 90s hit Let's Get Ready To Rhumble.

Nearly 20 years ago, as PJ and Duncan, the cheeky pair were regulars on the music scene. Let's Get Ready To Rhumble was first released in 1994.

But after a special performance of the song on ITV's Saturday Night Takeaway, it's top of the iTunes midweek chart.

It could even get the top spot in the official UK singles chart this weekend.