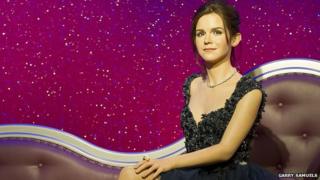 She's used to being around glitzy movie premieres surrounded by stars - so Emma Watson should be right at home in Madame Tussauds.

The Harry Potter star is the latest addition to the waxwork attraction's celebrity line-up.

The model goes on display today, sitting down against a starry background, in a dress Emma wore to a red carpet do in Hong Kong in 2011.

Emma's HP co-star Daniel Radcliffe was immortalised in wax back in 2007.