Search and rescue teams to be run by private US company 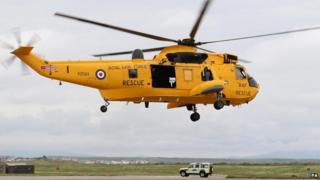 The UK's helicopter search and rescue service, which employs Prince William as a pilot, will be taken out of military control and run by a private company called Bristow.

The Royal Air Force and the Royal Navy have run the rescue service for more than 70 years.

But from 2015 it will be taken over by a private company based in America.

The government says that the more up-to-date and faster helicopters would be able to reach some incidents more quickly than they currently do.