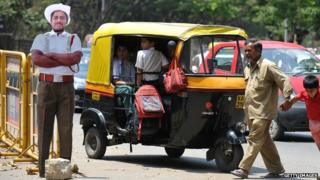 An Indian city is using cardboard policemen to try and reduce crimes on the roads.

Police in Bangalore are hoping the life-size cut-outs will look like the real thing at a distance and scare drivers into behaving better.

Road accident numbers are rising in India even though not many people own cars.

Poor law enforcement, untrained drivers and bad roads are believed to be the cause.

Bangalore police chief M A Saleem says many Indian drivers will only obey traffic rules if they think the police are watching.

"Drivers in Indian cities violate traffic rules when there are no cops around - they jump traffic lights and go the wrong way on one-way streets," he said.