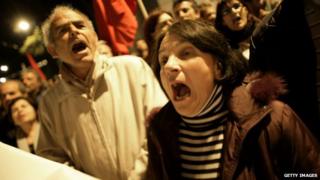 Cyprus has agreed a deal with the European Union to help handle the country's money problems.

Politicians worked into the night to agree on a 10billion euro bailout deal.

As part of the deal Cyprus has to close down its second-largest bank.

So this deal hits people who have lots of money saved up.

The previous suggestion for a deal had angered people on the island: under its terms, all customers of Cypriot banks would've had a portion of their bank savings taken.

It led to protests and lots of people trying to take their money out of banks just in case any was taken.

Banks in Cyprus are currently closed and it's not clear whether they'll open this week as planned.