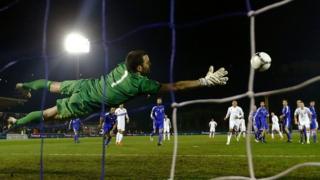 England scored eight goals to record their biggest win in over 25 years - beating San Marino 8-0 in their World Cup qualifier.

Wayne Rooney, substitute Daniel Sturridge and another from Defoe completed the thrashing before the ref blew the whistle.