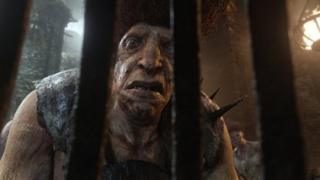 Jack the Giant Slayer is a fairytale adventure based on an ancient folk tale called Jack and the Beanstalk.

There are loads of these fairytale-style films coming our at the moment and you can watch Joe's report about the others being made by clicking here.

But first- here's what movie man Joe thought of the film.

Its about Jack who is a poor farm boy who comes across some magic beans that, when wet, grow into a giant beanstalk. The beanstalk goes so high into the sky that it joins with a floating island in the clouds which is where a nasty group of giants live and Jack must help to save the kingdom from these angry monsters.

Obi Wan Kenobi from Star Wars! Ewan McGregor plays a brave knight who has to save the Princess. Sadly he doesn't have a lightsaber in this film! 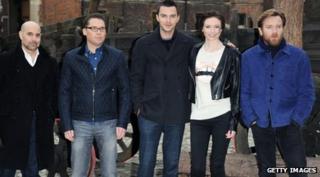 The director and cast of Jack the Giant Slayer

Another recognisable face is Jack's - he's played by Nicholas Hoult who was Beast in X-Men: First Class.

Once the action starts this fairytale adventure is really good. There are some big surprises as certain characters change sides from good to bad. Ewan McGregor is also brilliant as a brave and, at times, rude knight.

At the start there is a lot of time spent setting the scene as we meet all the characters.

Maybe a bit too much actually as the princess and Jack are introduced to the audience and you just want them to get on with it a bit. As soon as the water hits those magic beans though, it's fun all the way to the end.

The giants are huge and not too scary and the special effects are really good. The film took years to make and the extra time spent on computers has been worth it!