Universe could be 50 million years older than predicted 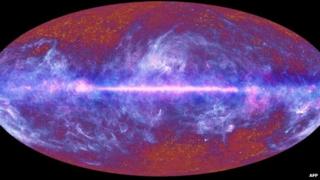 Scientists at the European Space Agency have created a special map, which they say reveals many new possibilities about the origins of the Universe.

They used extremely high resolution pictures to map light and radiation - called Cosmic Microwave Background - from across the sky.

The images, that have 50-million pixels, show the 'oldest light' in the universe. Kind of like an imprint of the radiation left behind from when the Universe first came into existence.

The experts say its mottled pattern confirms the Big-Bang theory for the origin and evolution of the Universe.

It also shows the Universe is older than was first thought - around 50 million years more.

That may seem like a massive number, but in 'space' time - it's really not that much, and it suggests the Universe is actually 13.82 billion years old.

The images were created using the agency's Planck telescope, which has been used to study the skies for 15 months.