Has Voyager-1 left the Solar System? 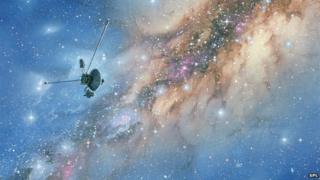 Scientists are debating whether a spacecraft launched over 35 years ago has reached the end of the Solar System.

Voyager-1 left Earth way back in 1977 and was originally sent to study other planets.

Some researchers say it now appears to be in a part of space beyond the influence of our Sun.

Nasa, which manages Voyager, say that it still regards it to be inside the Solar System.

They're still not sure if the probe has reached interstellar space - the area outside our Solar System because the probe is still recording energetic particles coming from our Sun.

However, the Voyager-1 is detecting a higher number of cosmic rays from interstellar space but some scientists won't believe it's left our Solar System until they have more data.

The probe completed its original mission in 1989 - where it was sent to survey Jupiter, Saturn, Uranus and Neptune.

Voyager-1 is powered by plutonium and scientists should receive data for another 10-15 years before it runs out of electricity.