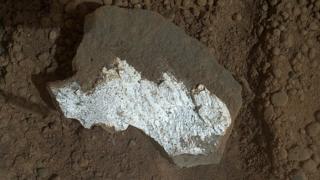 A rock crushed under the Curiosity Mars rover's wheels has dazzled mission scientists in more ways than one.

Mars is supposed to be the Red Planet, but the rock - dubbed "Tintina" - is a brilliant shade of white.

Scientists say this discovery is yet more evidence that there could be water on the planet.

They say this is because the colour must have been created by minerals containing water.

Some may argue that this discovery even shows that Mars could have at one point supported life.