UK has biggest rise in recycling rates in Europe 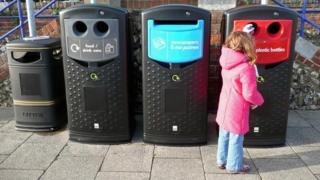 The UK has had the biggest rise in the amount of waste which is recycled, compared to the rest of Europe.

The report is by the European Environment Agency, which is in charge of monitoring environmental issues across the EU.

Though this is the biggest increase, it actually means the UK is now recycling a similar amount of waste to most of the other countries in Europe.

The EEA wants all European countries to be recycling at least 50% of their waste by 2020, but the group warns that some countries may not make it.

Places like Romania where just 1% of waste is recycled, and Greece, where they recycle 18% of their waste, are likely to struggle to meet the requirements.

The report also shows that in Norway and Finland, where recycling is quite high, the total amount has actually dropped by 1% over the past decade.

Some countries, such as Germany, Austria and Belgium, already recycle more than half of their waste.