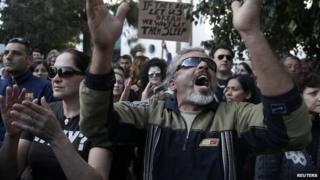 The Cypriot parliament is expected to vote today on whether to take some money out of the bank accounts of people living there to help deal with the country's financial problems.

Like other countries in Europe, Cyprus is struggling with money and in the last few years the cost of living has risen sharply.

Last week the Cypriot government asked the European Union for help - but the deal on offer comes at a cost.

In return for a loan worth more than £8 billion, many people living on the island may have money taken straight out of their bank accounts.

Some people could have to hand over almost a tenth of their savings to the Cypriot government.

The news caused a lot of anger with people protesting outside the parliament building.