Teachers in England and Wales say they may go on strike 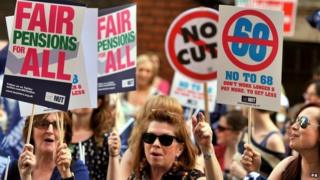 Teachers in England and Wales say they may go on strike to protest about pay, pensions and the amount of work they have to do.

Two unions - organisations that represent the teachers - say their members have voted to hold a series of strikes in the summer term.

So far, they say they will hold strikes in different areas at different times, but they warn they may hold a full national walk-out too.

The groups did say they may cancel their plans though, if the government 'responds positively'.