Forecasters say another cold snap is on the way 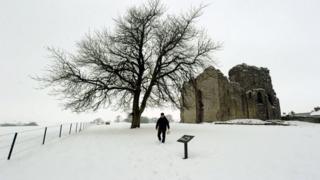 Parts of the UK woke to freezing temperatures, snow, rain and sleet today - and forecasters say there could be more to come.

Areas in northern England and Scotland have had more snowfall over the past couple of days.

While in southern parts of the country there has been flooding, after 12mm of rain fell in just a few hours yesterday.

There are several weather warnings in place for snow and flooding.

In north-east England and in the east and central areas of Scotland there are warnings for more snow.

Weather experts say it may be heavy enough to cause some disruption to travels.

The Environment Agency have issued flood warnings too, these cover parts of eastern England and in places in the north-east of the country.