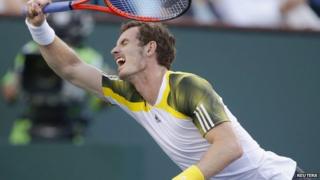 Andy Murray has lost out on a place in the BNP Paribas Open semi finals after being beaten by Argentina's Juan Martin del Potro in Indian Wells.

The British number one managed to win the first set, but went on to lose the next two.

"It was a tough match,'' Murray said.

"He played like someone that's won a lot of matches recently."

Rafael Nadal, who knocked out Roger Federer, will play Tomas Berdych in Saturday's other semi-final.