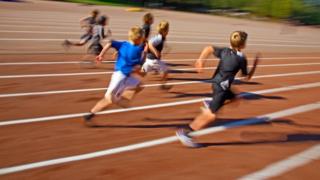 The government has announced new funding for school sport and PE worth £150m a year for the next two years.

The money will be given directly to primary schools in England.

Schools will be able to use the extra cash to pay for coaching sessions to improve the quality of PE lessons.

Prime Minister David Cameron said: "We can create a culture in our schools that encourages all children to be active and enjoy sport."

He added: "The Olympic and Paralympic Games marked an incredible year for this country."

"I want to ensure the Games count for the future too."

"I think it should be spent on proper running tracks, so we don't have to run on grass."

"I think that my school should build a swimming pool."

"I think my school and all schools should have a race track, so for PE sometimes we could run."

"I think the money should be spent on fixing stuff because our swimming pool cover needs to be fixed before the summer or Key Stage 1 won't be able to go swimming."

"Our school would love to have a sports hall. We have wanted one for ages and not had enough money to build one!"

"I think my school should buy hurls (for the Irish sport hurling), hurdles and rugby equipment."

"I think it should be spent on re-turfing the hockey area on our large playing field as it is currently full of holes."

"I would like it if we had more resources for athletics and badminton. Our school doesn't have a lot of sports clubs."

"I think our school should have some new cricket bats because the old one's are REALLY OLD!"

"I think the money should be spent on PE equipment such as volleyball nets, football posts and some brand new mats to do gym on."

"I think the money should be spent on basketballs because we only have one and goal posts so we don't have to use cones."

"I would like to have more gymnastics in my school and some running tracks because I love gymnastics and athletics."

"I think money should be spent on more up-to-date equipment because in my school the trampolines aren't bouncy enough for people to show off their talent."

"I think the money should go towards after school clubs which would encourage the next generation to do more sport."

"I really want to become an Olympic athlete and I want to do diving but there is no diving centres around Dover and I will love it if there was a diving centre here."

"I think our school should have new footballs because they're too soft."